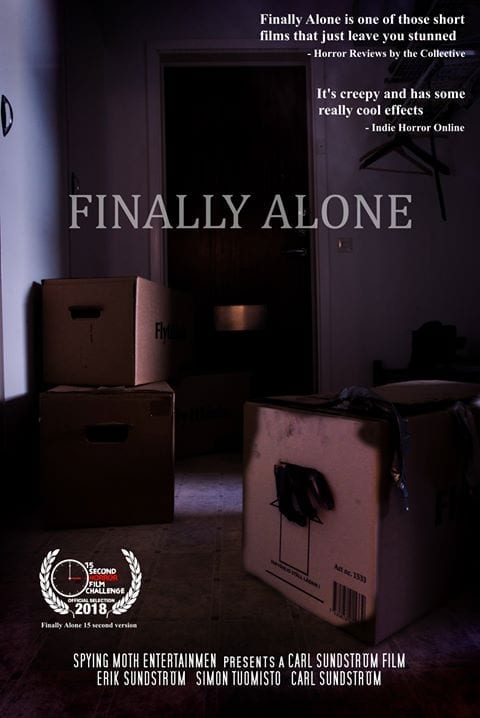 Carl Sundström is a director who’s been making short films since he was young. His latest short film runs for 1 minute and 25 seconds and still manages to get a good grip on both narrative and visuals.

After moving into a new place, a man gets the unsettling feeling that he is being watched.

Written and directed by Carl Sundström.

What’s the Short Film About?

As the film is not yet released to the public, I can only tell you a little about it. The story sets up with a man talking on the telephone. He’s finally getting the last of his packing boxes movies into his new house. His conversation moves onto talking about how much he loves the new place.

Meanwhile, behind him, a light flickers on and off.

Despite the flicking light, he now feels much better.

Finally alone is reminiscent of the short film ‘Lights Out.’

The film takes a turn at creating a little tension as it is obvious, this new place is not so safe after all.

Carl Sundström can be contacted through his Facebook Page where you can see more of his work.

Do you need some new 2019 short films to sink your teeth into? Look no further than Brooklyn Horror Film Festival batches of horror goodness.

If Christmas horror shorts are more your style, get ready for this set of new horror to feast your eyes on. They’re new and they’re great and you can watch them all right now.

Donate your spare change and buy me a coffee. We like coffee.

Thank you for subscribing.

we respect your privacy and take protecting it seriously